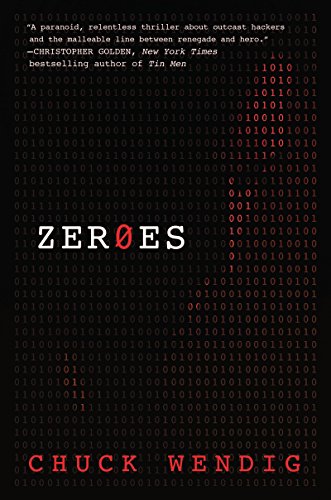 Zer0es, by Chuck Wendig, is a redemption tale for five hackers. Black hat hackers blackmailed into turning good come together to help the government – or so they thought. Soon they find themselves in a life or death situation to stop the computer program Typhon from infiltrating all aspects of modern civilization and essentially taking over the world. Zer0es is a fast-paced thrill ride that will leave you questioning whether our growing dependence on AI is truly worth the risk.

Zer0es is the first Chuck Wendig book I’ve read (besides books on writing), and I am surprised I have not read more by him. I enjoyed this book, but I especially enjoyed the beginning – which focused more on the actual hacking – as opposed to the end. The second half of the book turned into an odd terminator-like action novel with the hacking details a thing of the past. The beginning of the novel gave me nightmares more so than any horror book ever could. The ease at which it seemed these people could hack into someone’s account or steal their identity or ruin their life seemed extremely realistic and, admittedly, I went and changed some of my passwords.

Books are made by their characters, and each character depicted in this novel had their own interesting background and separate hacking story. This made the novel very enjoyable as the characters spent more and more time with each other, letting their personalities out. Most of the characters continued to grow on me as I learned more about them (Aleena, for one, is a badass), except Reagan, who I found to just be annoying and found myself wanting to fast forward any time she would speak. I listened to this book on Audible and the narration was phenomenal. Ray Chase’s narration added a fun element to the story that enhanced the listening experience. I would definitely recommend listening to this one.

The sequel, Invasive, was released in 2016, and I am adding it to my to-be read list for future reading. Zer0es foreshadowed some of the action that is to come, and I am excited to see what happens.