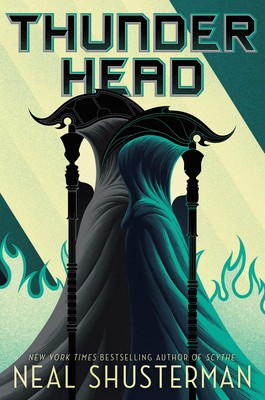 *Spoilers if you have not read Scythe*

Thunderhead is the second book in the Arc of a Scythe series from Neal Shusterman. It continues the story of Rowan and Citra as they continue to fight the growing greed and corruption in the ranks of the Scythedom. This story introduces new characters as well as bringing back some of the old favorites. Despite her unwillingness to accept it, Citra is growing a following and establishing herself as a leader within the ranks of young Scythes. Her unconventional gleaning routines have caused a stir across the Scythedom, and she has become a target for those disapproving of her ways. Scythe Curie continues to mentor Citra, but through this mentorship has become a target as well. Meanwhile, Rowan is trying to bring down the corrupt Scythedom one corrupt Scythe at a time. But his vigilante ways have angered many, and an old friend plans to put a stop to Rowan and make him pay off his debts.

Throughout it all, the Thunderhead watches. Unable to interfere in the matters of the Scythedom, the Thunderhead must find a loophole to try and stop what only it can see coming. But a computer, even one as great as the Thunderhead, is limited in its capabilities. A train is flying uncontrollably down the tracks, and there may not be anyone, human or machine, who can stop it.

The first half of Thunderhead nearly put me to sleep. As the story is being built, and new characters and character arcs are being introduced, my interest waned. The narration before each chapter by the Thunderhead itself was unimaginative, oddly worded to sound more mechanized, and left me uninterested. However, what the first half was building toward was well worth it, and as I made my way into the second half of the book, I could not put it down. The pace increased, the narrative shifted, the writing became more interesting, and the story sucked me in. Scythe was a challenging book to follow. A unique and interesting take on a dystopian novel in a world of dystopian novels, Scythe stood out. Now, Thunderhead picked up the mantle, and despite the slow start, carried a strong second act leaving me anxious for book 3. The ending of this book will both enthrall you and anger you and leave you not just wanting more, but needing more.

Currently Reading: The Way of Kings by Brandon Sanderson