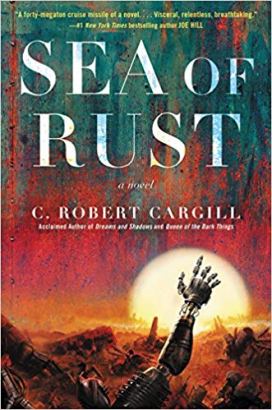 Sea of Rust by C. Robert Cargill tells the story of a post-apocalyptic world unlike many that have been written before. This is not a story of human survival or human redemption. This is the story of a world where humans are extinct. Years ago a war broke out between humans and Artificial Intelligence. AI won. Now, the superintelligences that led the robots to victory are collecting the survivors and creating one giant intelligence. Free bots roam the wastelands, hiding from the One World Intelligences, scavenging parts, doing what they can to survive and keep what is left of themselves intact.

Sea of Rust was an interesting read and a unique take on a post-apocalyptic story. Many stories surrounding AI taking over the world usually leave some human aspect in it, and the story follows the survivors as they try to rebuild. Not this. I loved the concept and the way C. Robert Cargill told the story of what led to the current state of the world through flashbacks throughout the novel. However, I think there is a reason that most post-apocalyptic stories like Sea of Rust keep some human element involved. The emotional connection to robots as opposed to humans is not the same. Although, Cargill attempted to humanize the characters as much as possible, it missed the mark for me. I did not feel any connection to the characters and found myself not feeling invested in their fate. No matter what type of story I read, if I am not emotionally invested, it is hard for me to enjoy it fully. I appreciate the uniqueness of Sea of Rust, and I enjoyed the story. But lacking in emotional connection, the feeling of holding my breath begging for the characters to survive and keep fighting, made the story just an OK read for me.